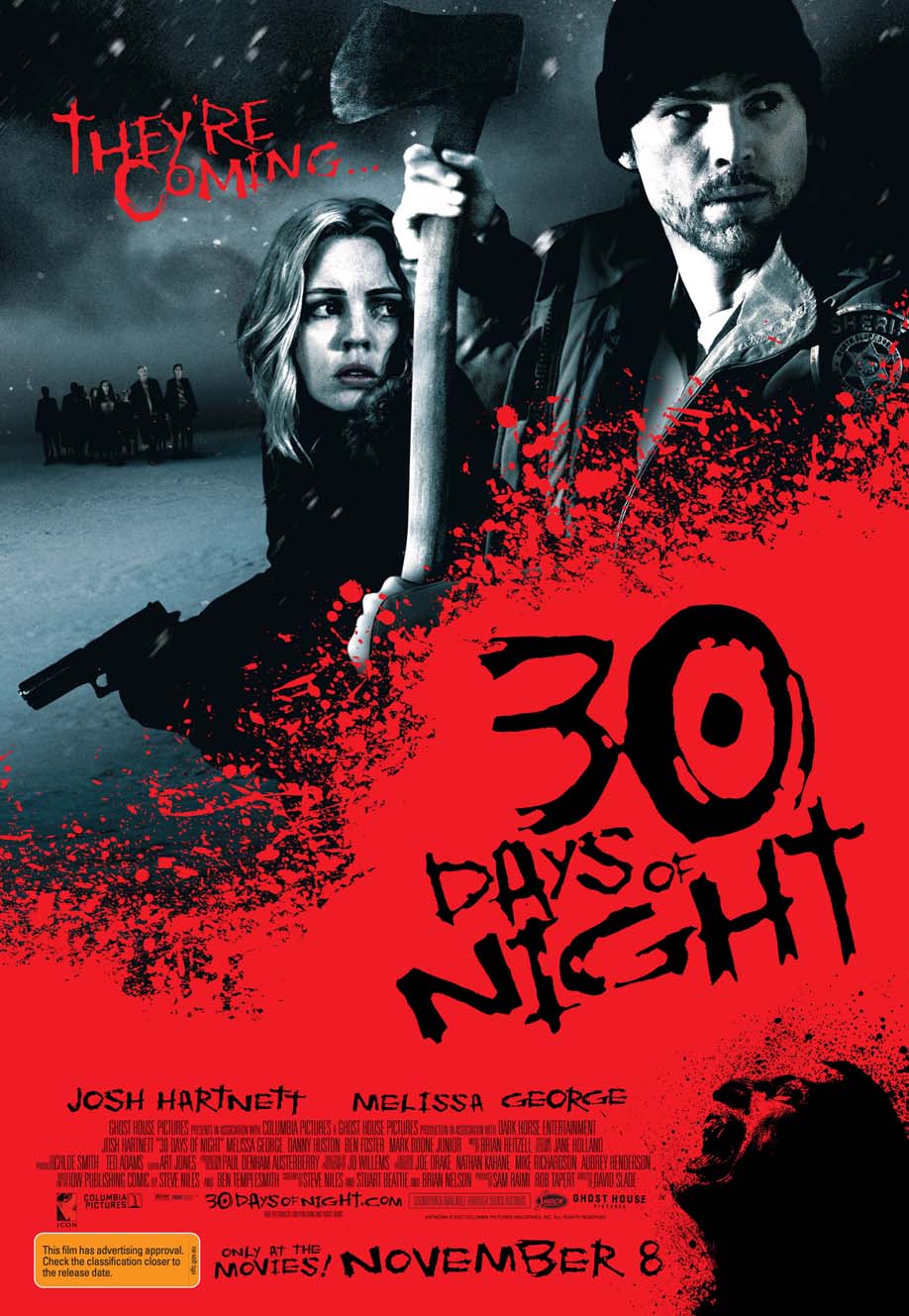 This post is the eighteenth in my 31 Days of Vampires! series for October 2014. 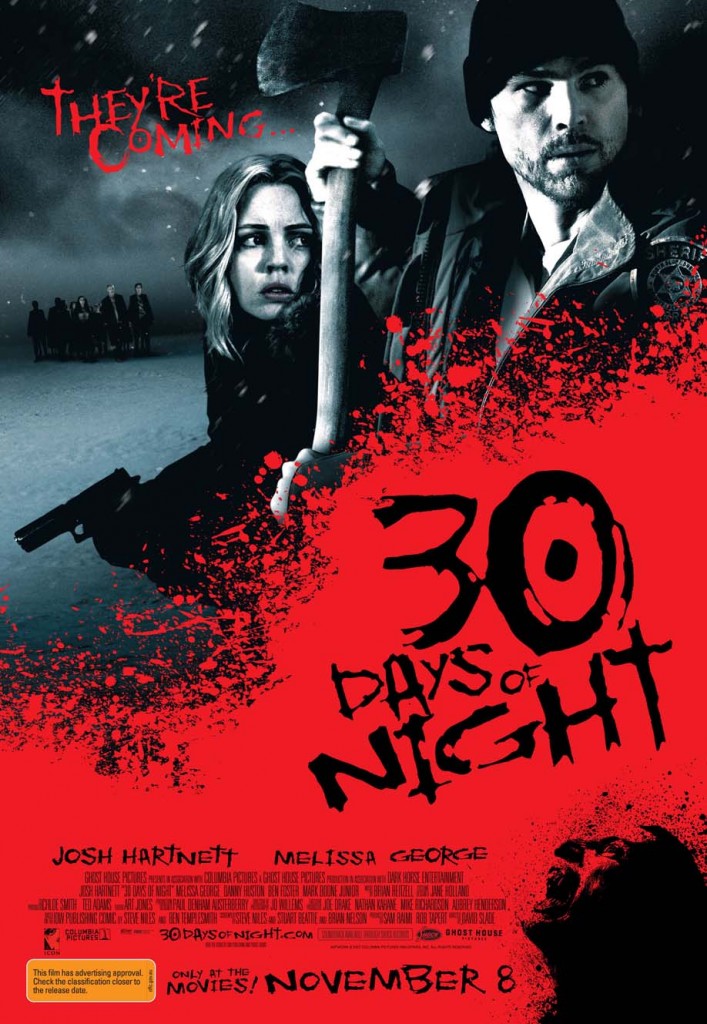 The premise of this film, born of a screenplay-pitch-cum-comic series, seems solid: Barrow, Alaska, America’s northernmost town, plunges into its yearly month of total darkness. At which point – unlucky them – a pack of feral, shrieking vampires descends on the place and eats everyone up. It is left to super-handsome sherrif Eben Oleson (Josh Hartnett) to hack up vampires and get the surviving villagers through the month safely.

The film is a tense one, I’ll give it that. The requisite television volume level you’ll need to hear the whispered conversations of the hunted humans hiding in their cold dark houses will also serve you well for the jump-scares of shark-fanged, horrific vampires busting through plate glass and flying out of the shadows.

But if you squint at it, the film project doesn’t hold up so well. Lead Vampire Marlow (Danny Huston) explains in a weird clicky vampire language that vampires worked for centuries to make sure they’d be regarded as fable, not as reality. Are we to believe this pack of vampires needs to demolish one hundred and fifty two people every thirty days – and then somehow destroy the forensic evidence? (Not possible!) Do the vampires go into hibernation and feed less frequently, making massacres a once-a-decade event? Even so, hanging out in a pack hardly seems wise. Because let’s get real: vampires really can’t stand any police or human scrutiny, not really – since they are entirely vulnerable to daylight. If the film wants to make this breed of vampires unique or interesting, they might have tried to flesh out the premise a bit better – or left the premise more mysterious. For instance, leaving out subtitles for the sparse vampire speeches would have lent an arbitrary horror to the business.

And of course, we have the cliched White Male Hero effect. The group of survivors, despite having nothing to do for weeks, apparently can’t function without Eben’s brawn and brains every step of the way. After three weeks of the seige they take advantage of a whiteout and stumble into a dark store for provisions (“Never trust a store in an apocalyptic film,” my daughter wisely intones). Eben barks out orders and tells each person what to grab. Nah, bruh. This is the kind of thing that would have been written out by list in downtime – and Eben wouldn’t have been the only one to have some ideas as to supplies desired.

The film descends into cliches. Melissa George as Eben’s estranged wife whispers and trembles her lips a lot. There’s a bit of dialogue regarding a vampire child that is cringe-worthy (and, I understand, directly lifted from the source material). Then there’s the reveal of a man who on Day One of the slaughter murdered his entire family right off the bat, to keep them from being vampires. At the end of the film, when about a dozen survivors come out of hiding, it seems his tortured decision might have been a wee bit hasty.

A cute premise, some spooky vampires (Danny Huston and Ben Foster can always deliver the creepitude), and lots of adrenaline. Fans of millennial horror trends – “The Walking Dead”, the 28 Days/Weeks Later zombie plague, and Romero’s recent films – will probably enjoy this one. 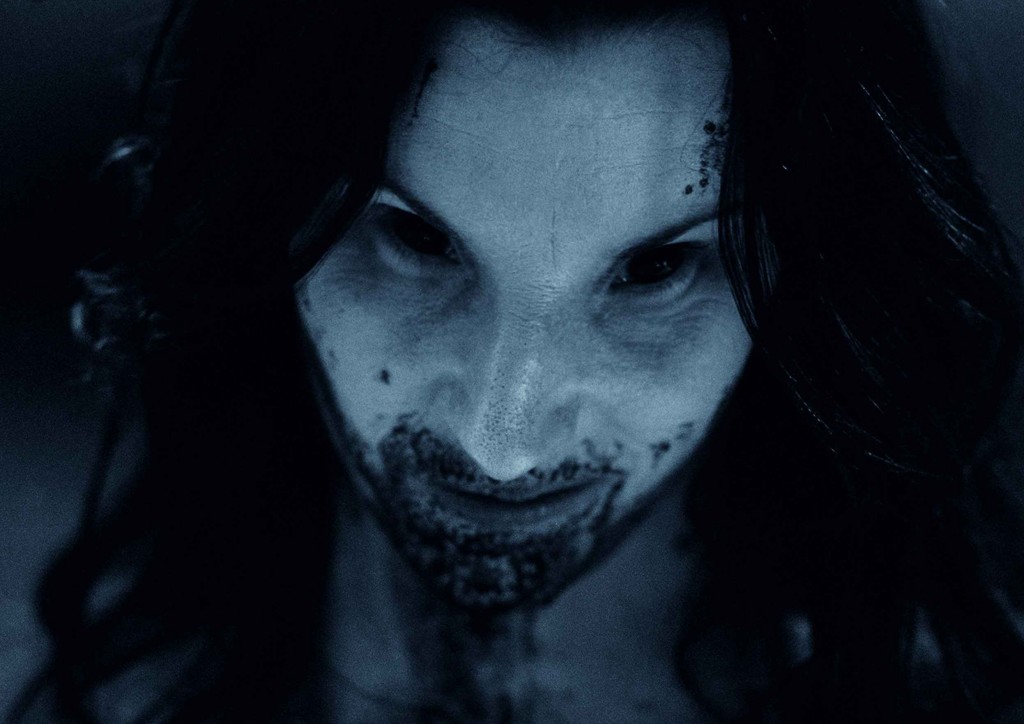