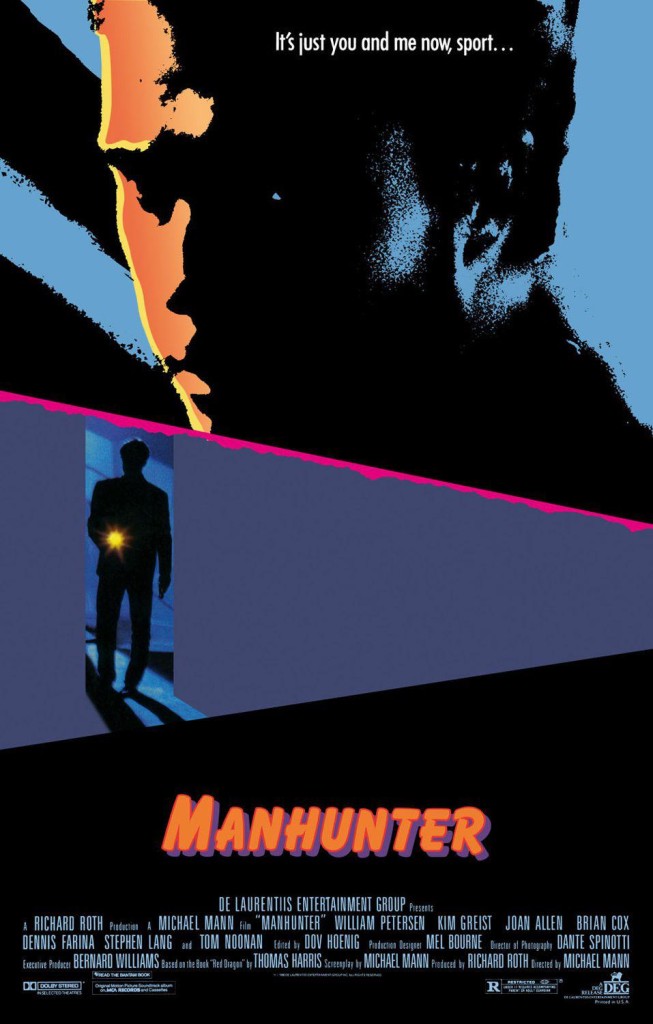 I can’t imagine how special Manhunter must have been to first-time filmgoers back when it came out. It is a creepy, tense, sparse crime drama that relies on our imaginations, rather than explicit gore scenes. I first saw the film about fifteen years later, and I loved it from the first frames. Repeated viewing may find it a tad navelgazey, turgid with director Michael Mann’s macho ennui*, but I don’t care. It is still a far better serial killer film than loads of them out there.

Manhunter stars sexy, tiny-beach-trunks-wearing young William Petersen as FBI profiler Will Graham and features Brian Cox as his recently-vanquished archenemy Hannibal Lecter (sometimes spelled Lecktor). When the film opens, Lecter is (fairly recent, but) old news. Graham has been out of a psych ward a little bit and now he’s spending his time sailing a boat, and rolling around with his ladywife in a bed clad in only sheets (what is UP with that, Micheal Mann? Did blankets kill your family?). These two, along with their son, live in a really fancy beach villa which we assume they can afford although they don’t do anything but dramatically gaze toward sunsets. Early in the film Graham’s ex-boss approaches Will and asks if he’ll work “just one more case” – a case involving a savage murderer who butchers entire families in the night.

Gee, will our hero risk his mind and mental state by once again engaging in the thrill of the ultimate cat-and-mouse game?

Look. I get it that serial killer movies are the ultimate white male fantasy. Manhunter is brilliant in that the only thing more powerful than the serial killer is the loner – the uber-special, super-intelligent, super-manly twisted-up-inside cop who is THE ONLY PERSON ON EARTH who’s got what it takes to stop this maniac and thus save countless innocents. (The film involves important men shouting into phones demanding choppers and Learjets!) Yes, I get that it’s a tired trope. But this film? Is still a lot of fun.

Petersen is fabulous; after his first onscreen appearance for about a minute and a half in Thief (1981), and the wonderfully dark lead role of To Live and Die in L.A. (1985), he is primed to show off here – and he does. He’s a bit broody and silly but he’s still quite watchable. The supportive cast is, mostly, note-perfect. Tom Noonan is simultaneously terrifying, repellant, and devastatingly piteous. Stephen Lang and Joan Allen have small but well-rounded roles. Dennis Farina (as Graham’s boss) does what Dennis Farina always does. He, and Graham’s wife and son, are the only sour notes in the piece. The latter two are like cardboard cut-outs of a family: less real people than the drugstore-picture frame family – blonde, blue-eyed, dressed in white-on-white, living in a picket-fence beachhouse. Uh-huh. The American Dream.

Because and then, of course, there is Brian Cox. In my book Cox is the best Hannibal Lecter we’ve ever seen – period. And we don’t see him chop, slice or dice, or even move very quickly. Perhaps his effectiveness survives on because he only had a few moments of film. Whatever the reason he leaves you wanting more, not less.

The sparse, Western- and noir-influenced style of filmography, along with a wonderful soundtrack and score (I don’t know what you previously thought of Iron Butterfly’s “In-A-Gadda-Da-Vida”, but I certainly never want to hear it again!). It’s a must-see for any fan of crime drama or thriller, or any fan of film, period.
* WHICH I LOVE, by the way!