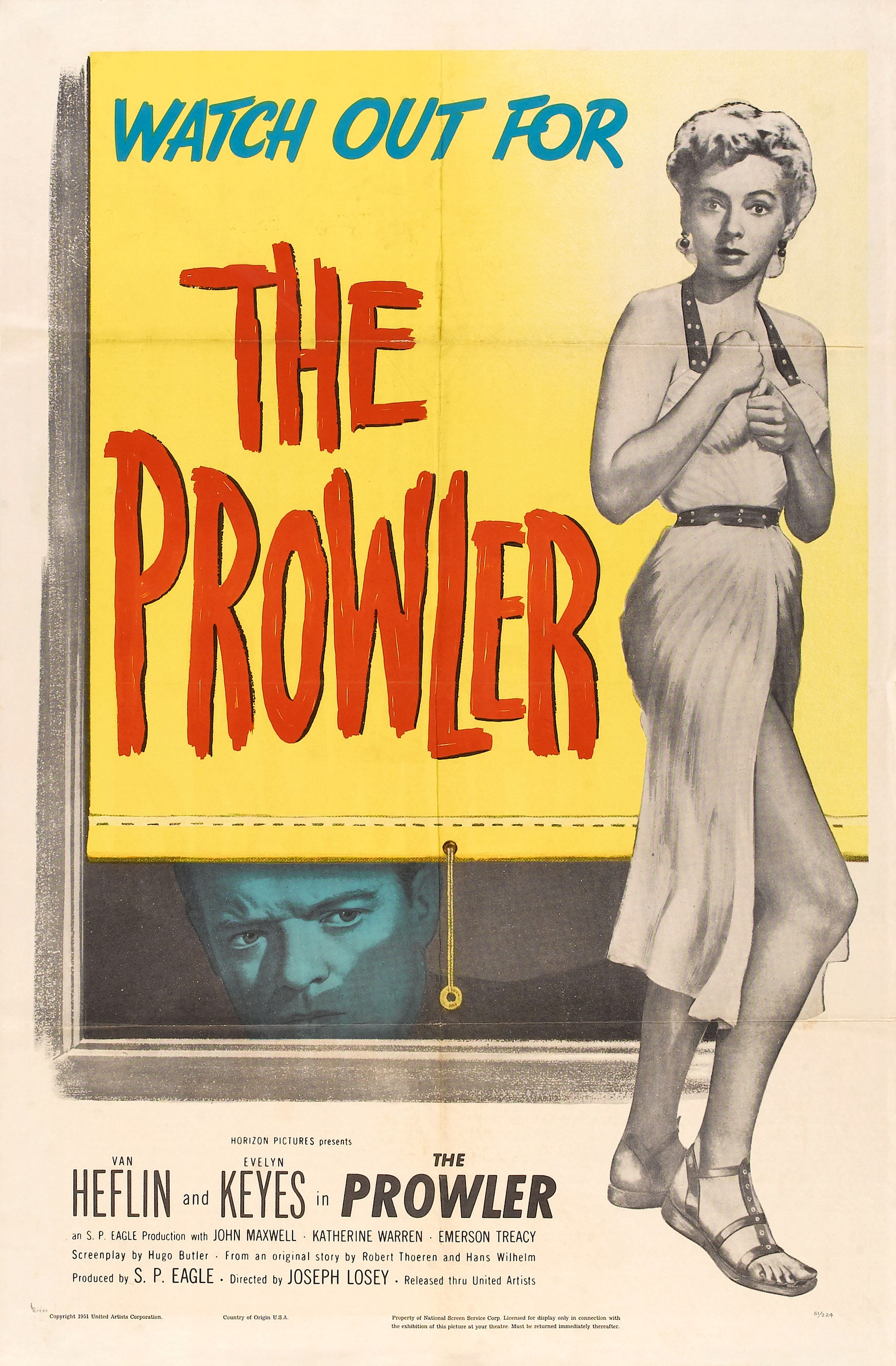 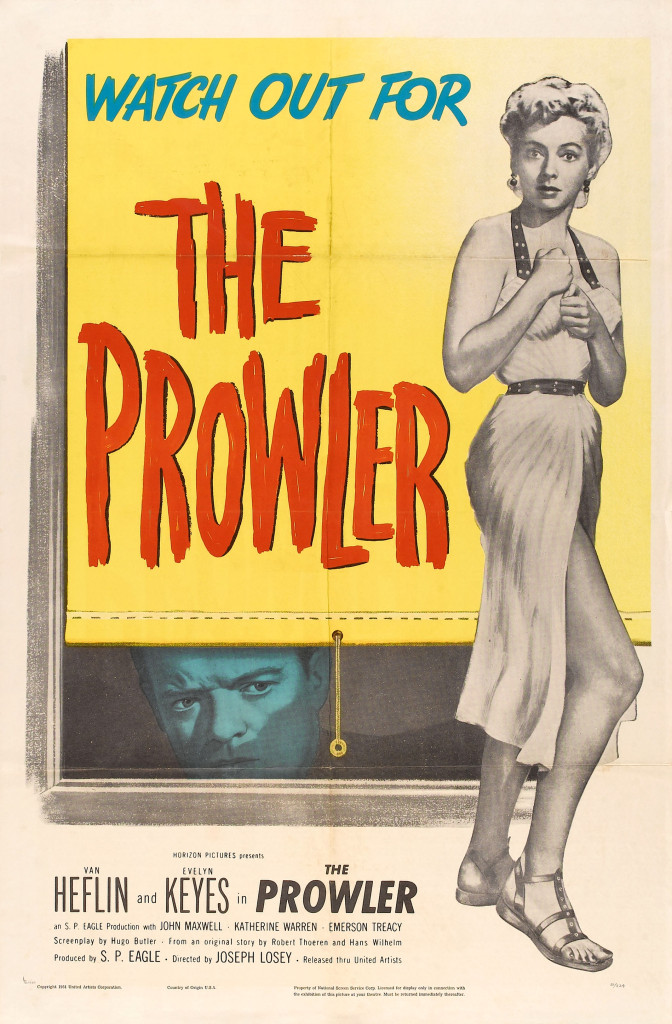 The Prowler is a psychological drama with noir and stage influences, set in just a handful of rooms over the period of a few months. The opening third of the work feels almost Hitchcockian; the viewer vaguely senses things are not all they seem, but we’re not sure where things are going. My partner, cooking dinner in the kitchen and overhearing the dialogue between Webb Garwood (Van Heflin) and his love interest Susan Gilvray (Evelyn Keyes), at one point stepped into the room to flatly say: “This movie is creeping me out.”

And indeed, it creeps pretty well. A film that might merely be yet another hour and a half of torturing women – in this case, one woman in particular – instead plays out in a surprisingly nuanced and frighteningly realistic scenario, likely through the pedigreed writing talents of Dalton Trumbo. Instead of relying on gore, lurid sexuality, or a disposable body count, the film hits where it hurts: in the domestic spheres so many suffer through in silence. I don’t know a woman alive who hasn’t had the persistent and unwelcome attentions of a dissatisfied and potentially violent man; we never know if we’re going to get Creeper Lite, or the Full Meal Deal. This film masterfully exploits this uncertainty. And since having to play this particular guessing game is exhausting, the film felt a lot longer than the hour and a half running time. More surprisingly still, the woman perpetrated against is never treated as cannon fodder or a vehicle for cheap titillation: she has a name, a story (if a bit bare bones), and is simultaneously vulnerable and strong, moral and immoral – as people are wont to be. A scene involving a baby’s birth falls woefully short of reality but, given the superb direction of the rest of the story, we can forgive that all-too-typical misfire.

And, without giving too much away… the actions of the stalker are thrillingly note-perfect. Our villain is at times a pathetic everyman dealt a crappy hand; then at other times a bully with a badge, armed and bolstered by our society’s tacit approval of his deeds. At times he is plotting, scheming, and clever; other times foolish and foolhardy. At times cold and clinical; other times passionate and easily misdirected.

The tension in the film is palpable, if the tale suffers a bit in plot development. Supporting cast are sparse, although masterfully-wrought: especially the relationship between the Crockers, as played by John Maxwell and Katherine Warren. The film feels more contemporary than dated – and that is saying a lot, given its trappings.

A flickering neon sign, a ghost town, and a quiet rustle of bushes in the dead of night: The Prowler is a perfect blend of thriller suspense, noir film values – and frightening realism. A must-see for fans of the thriller genre. 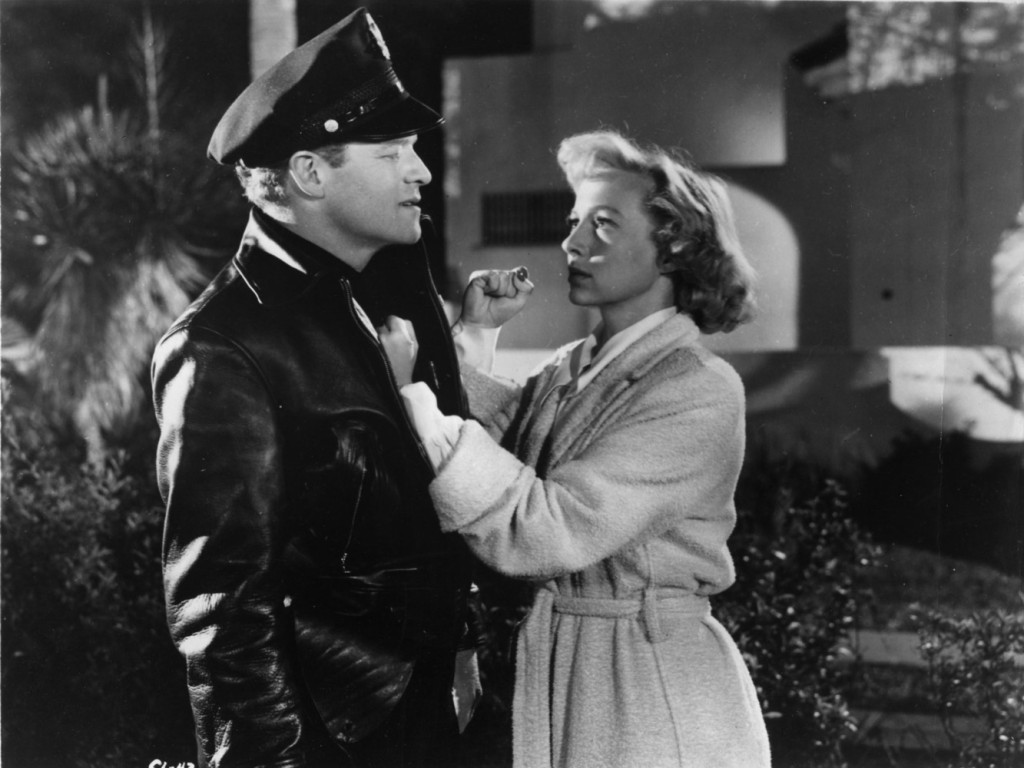