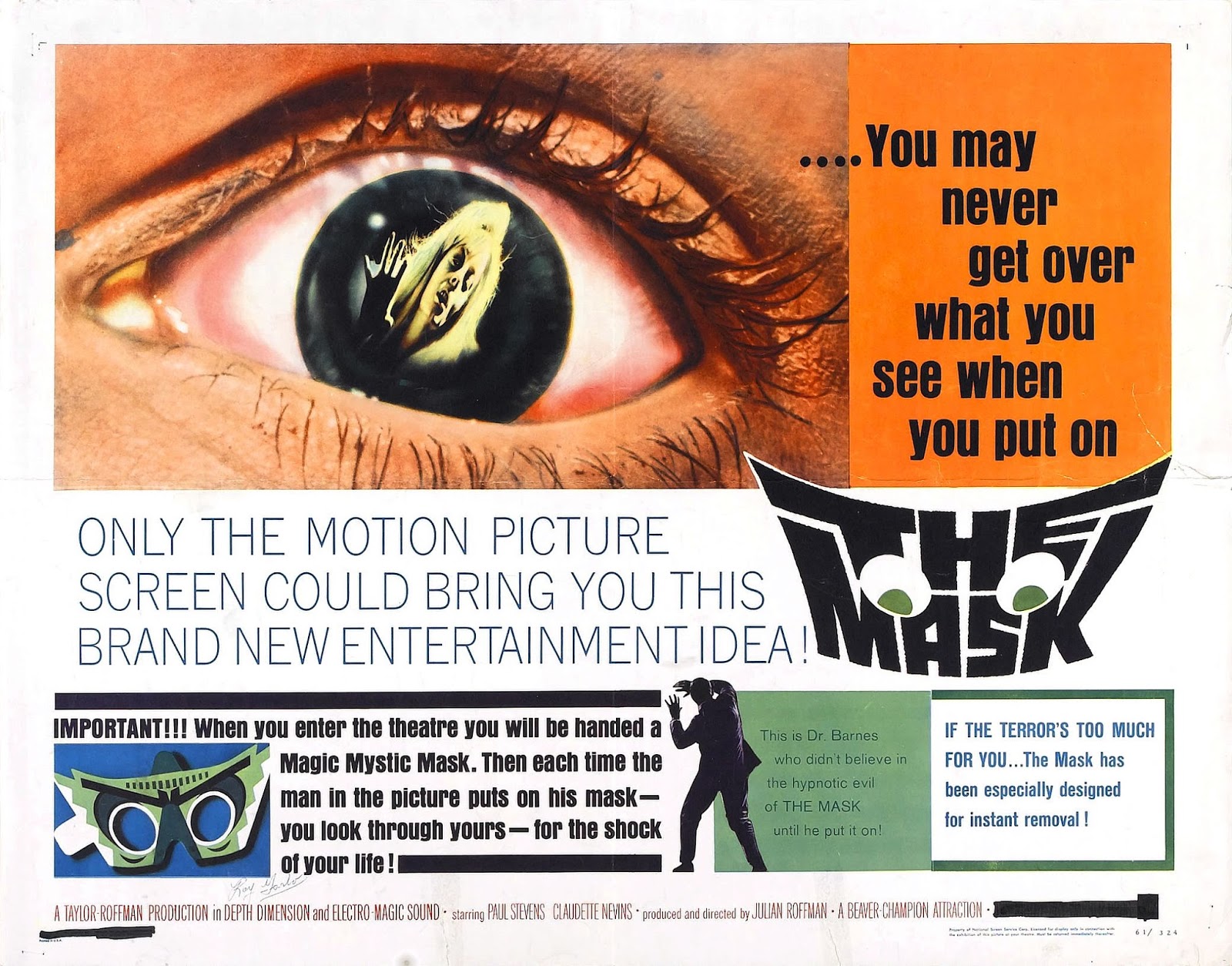 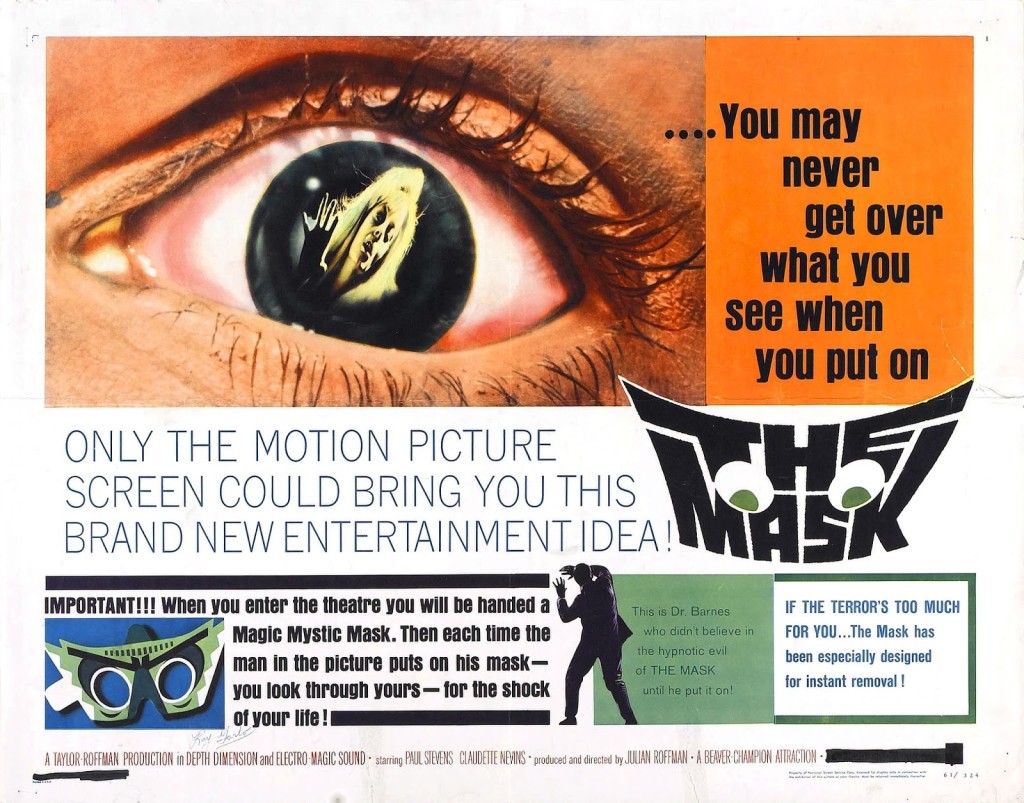 1961’s The Mask opens as older horror films sometimes do: with a authoritarian-looking white man in a study, telling us what we’re about to see is REALLY scary, and totes based in fact. We’re also treated to a bit of William Castle-esque carnival showmanship: viewers are instructed to put on our own “mask” (3D glasses), every time a character in the film dons the titular visor. And of course, beware as the story is so terrifying we might have a case of the vapours, et cetera. 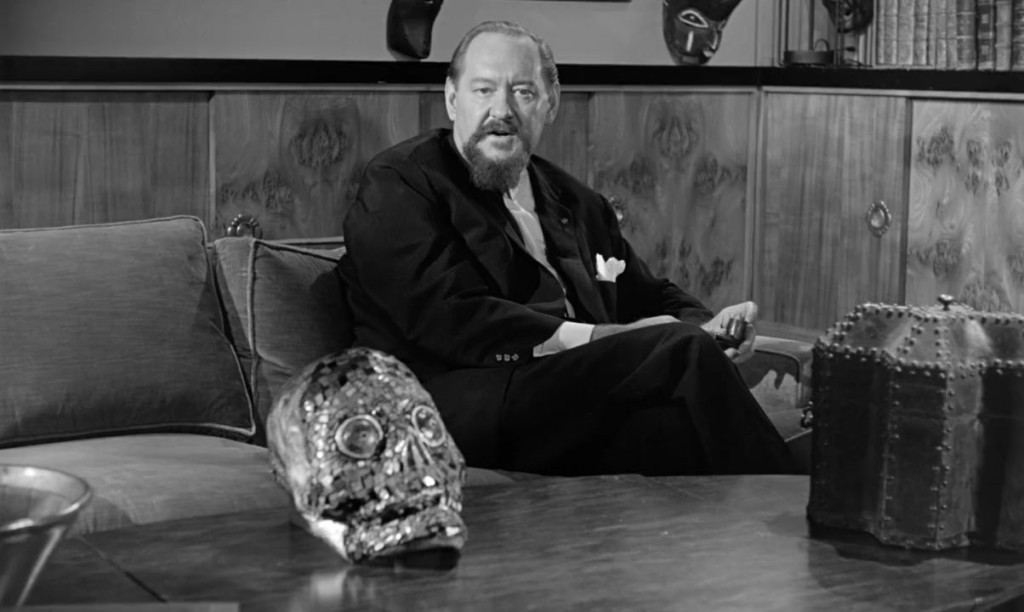 Then the action starts. We open on a lonesome night scene: a woman screaming, crying, and fleeing a killer. She stumbles through the woods – not trying to get away too hard, as is the case in such scenes – and is caught up and summarily strangled by a greasy-looking, Anthony Perkens-esque young man (Martin Lavut). In the morning Michael, the killer, seeks help from his doctor, Allan Barnes (Paul Stevens). Micheal tells Barnes he has come into possession of a ceremonial mask and that now this artifact is making him do terrible things in a blackout trance. Barnes condescendingly refutes the young man’s fears that he murdered someone – a possibility bolstered by the appearance of defensive wounds on Michael’s face – and the young man, distraught, flees the office.

From there, we are treated to a rather boilerplate horror mystery featuring the doctor, his fiancee (Claudette Nevins), his assistant (Anne Collings), the world’s least charismatic policeman (Bill Walker), and a few other characters – many in heavy quantities of creepy makeup. Twenty-five minutes into the film we get treated to the good stuff: a genuinely nightmarish, impressionist dream/trance state complete with visuals that brought to mind the eerie work of Jean Cocteau. In fact, the alternate-reality world of we’re shown is a lot creepier than most horror films out there, period. This effect is somewhat lessened by these episodic scenes – two more – that devolve into 3D gimmicks.

If the story were a better one, the film would be nearly impeccable. But – it isn’t. Leads Stevens and Nevins do as well as they can with the material, but it’s frankly silly material. The lead police officer is neither compelling or intelligent. The murdered woman in the film’s opening is never mentioned again. The film is rife with goofy movie tropes like: “oh I didn’t notice you were attractive until you took your glasses off and let your hair down!” You get the picture. 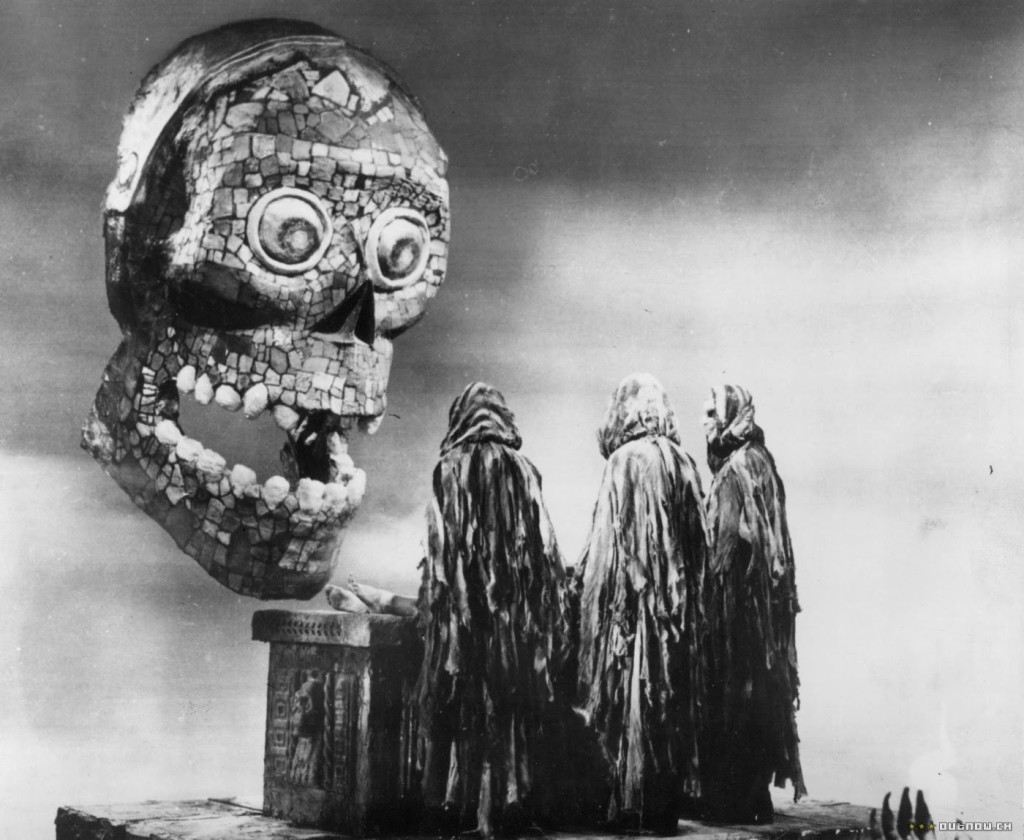 That said, there is a lot to like! The creepiness, the earnestness of the project, and the score and sound are excellent. Esteemed as the first Canadian horror film and 3D film, as well as cover art for 1986’s beloved B-movie book Re/Search #10: Incredibly Strange Films, The Mask is a really fabulous bit of film history. There is a lot of swag out there for the fan including a 3D Blu-Ray and a vinyl pressing of the impressively commanding score. I highly recommend all the above!