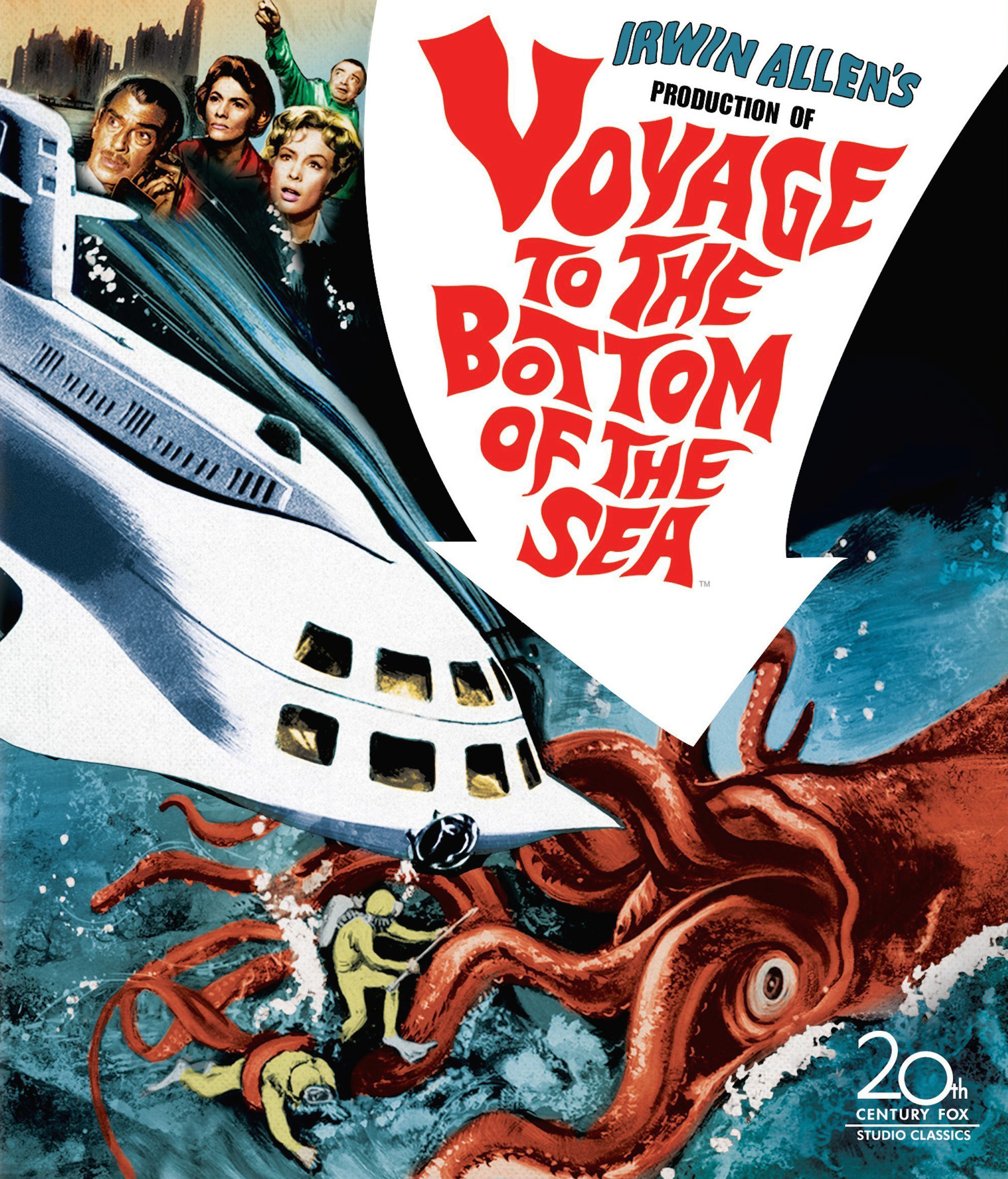 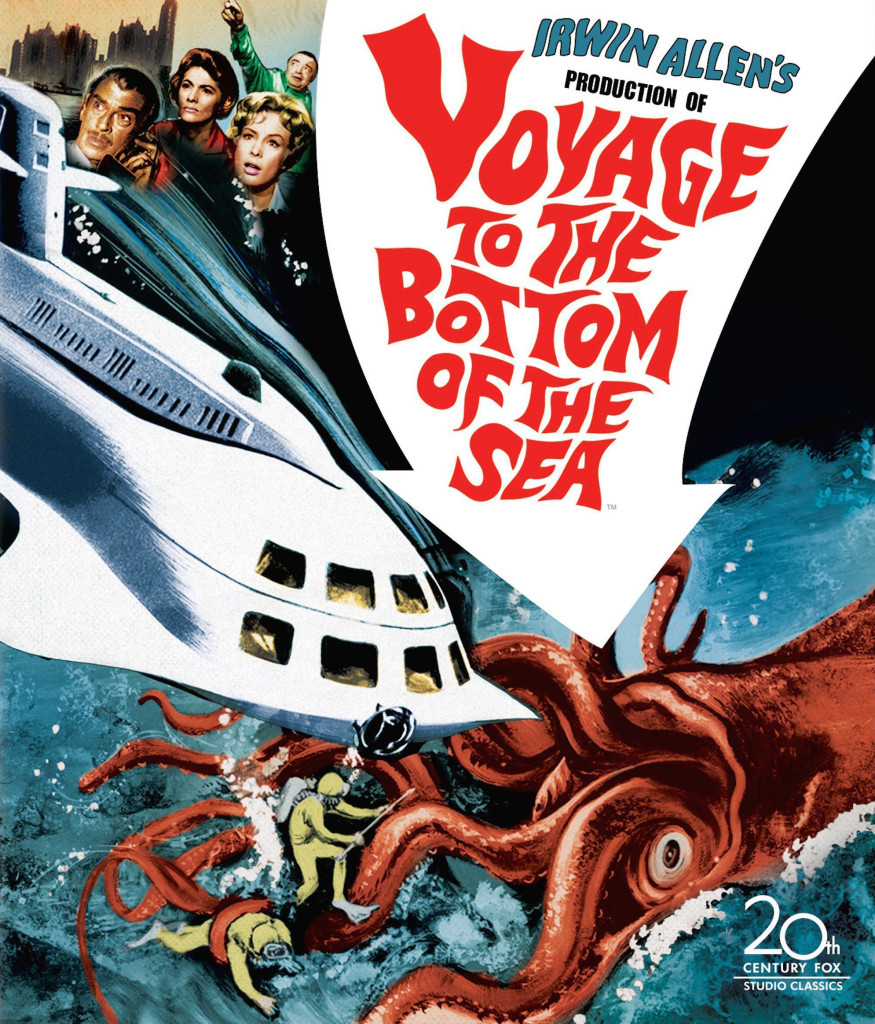 Hotshot nuclear submarine Seaview, pet project of Admiral Nelson (Walter Pidgeon), is being heralded for its technology. It’s also inexplicably huge! My son kept making jokes about this: “…and on the left, we have our museum complete with life-size dinosaur fossils…” Captain Lee Crane (Robert Sterling) romances fiancée Connors (Barbara Eden), the latter swishing about in an improbably-tailored uniform and filmed from the backside upon her entrance (because: dignity!). On-board as well are scientists Dr. Hiller (Joan Fontaine) and Commodore Emery (Peter Lorre), and Lieutenant Romano (a 22 year old Frankie Avalon who looks even younger).

After completing undersea tests, the submarine resurfaces to find a horrible fire in the sky, which now threatens life on Earth as we know it. (The fire, it turns out, is a result of a meteor shower hitting and igniting the Van Allen Belt. At the time of filming, the Van Allen Belt was a fairly recent discovery.) After rescuing stranded and almost-dead scientist Miguel Alvarez (Michael Ansara) and his dog, the crew makes their way to a UN convention where the scientific minds of the world argue about the action to take. Naturally, the Americans on the submarine have an aggressive, nuke-deploying plan – nothing more sophisticated than shooting the Van Allen Belt – and, naturally, this plan has a lot of risk. The UN votes against this course of action – but the Americans run away to do it anyhow. From there the crew battles both a giant squid and a giant octopus, a mine field – and one another, all while struggling under the stress of facing a possible Doomsday. 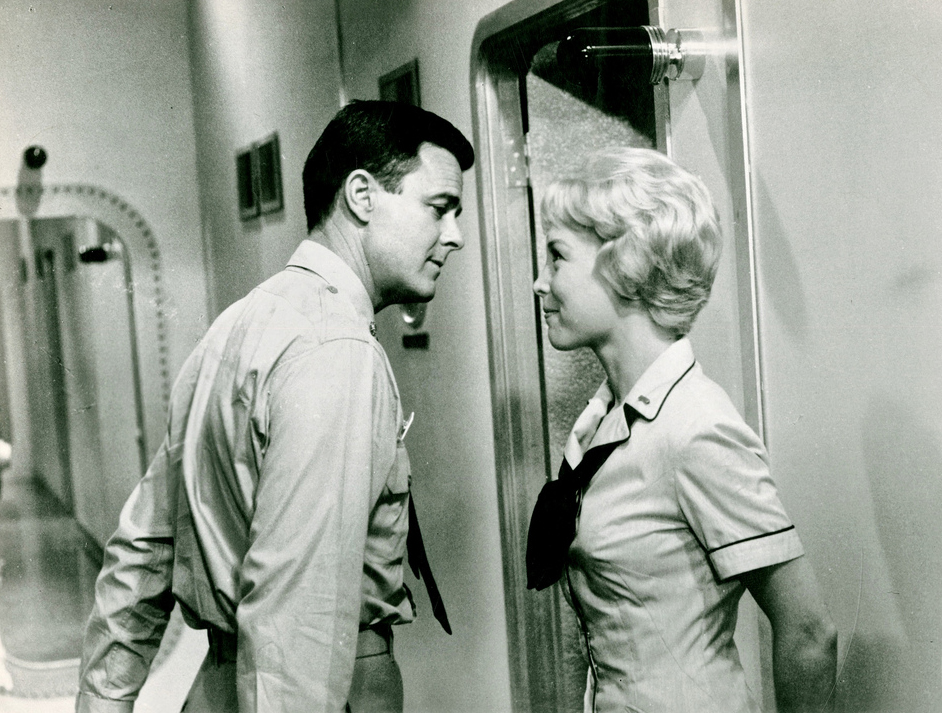 Considering the talented and/or charismatic cast, the high-stakes storyline, the natural suspense that most submarine dramas naturally afford, and some gorgeous visuals, the film is rather a flop. It drags on a bit which is surprising considering there are some great dramatic vignettes in the work. The film not only suffers from rather obnoxious strains of racism and sexism – the trailer only lets the white men talk! LOL! – but also from a heavy-handed American nationalism. And perhaps most damming, I got the distinct impression Voyage was trying to compete with, or surpass, the commercial and critical success of Disney’s 1954 20,000 Leagues Under the Sea. “Not even the soaring imagination of a Jules Verne book!” – the film’s dialogue boasts. But… maybe not. Critics and audiences simply didn’t concur.

While a good piece for B-movie historians, especially if you’re a fan of the actors involved, I probably won’t watch it again.

Director Irwin was involved in a television spin-off that ran over four years and produced 110 episodes.