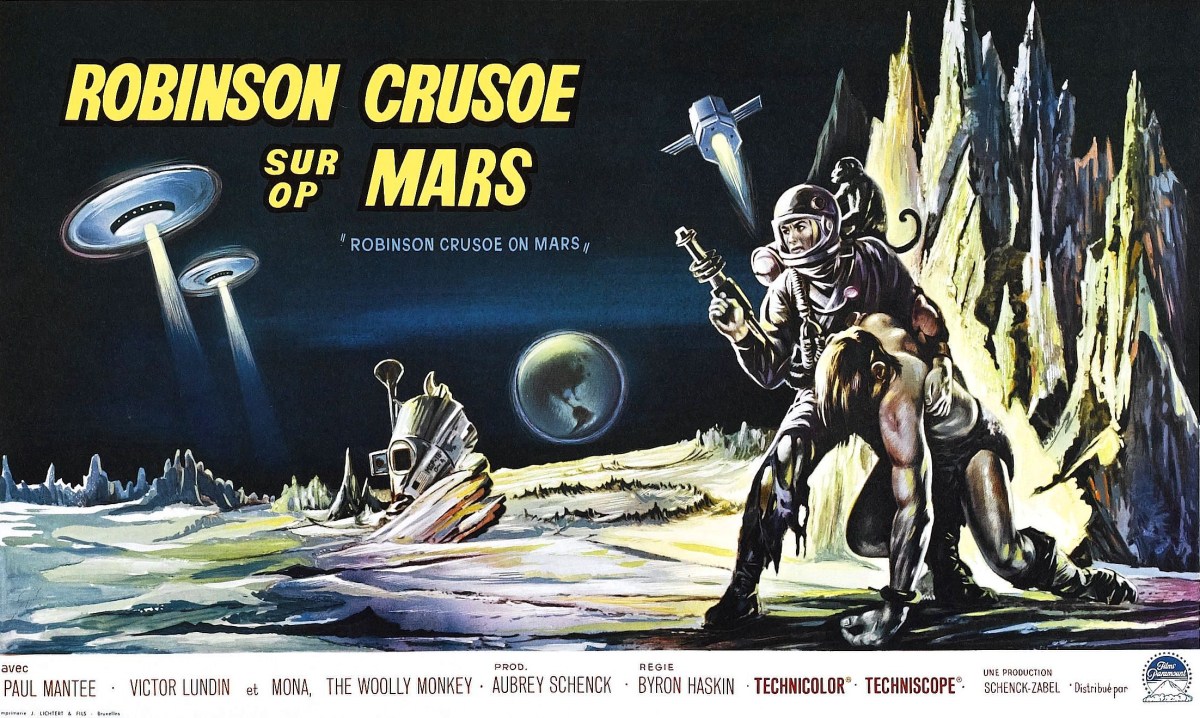 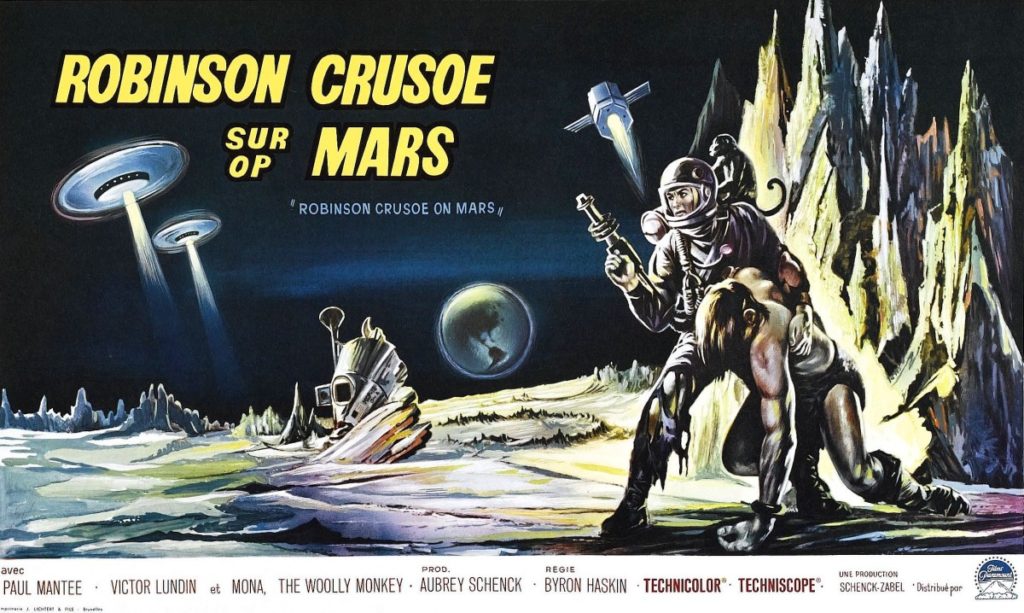 Known in retrospect as one of the earliest sci-fi space epics to feature attempts at realistic science as well as a plotline based more in human nature than improbable alien encounters, Robinson Crusoe on Mars is a delightful adventure that stands scrutiny today. A glancing familiarity with the 199-year old Daniel Defoe source novel (as most people have) will unfortunately spoil events that otherwise would be a delightful surprise; however the proceedings are nicely modified for the sci-fi medium and the result is a family-friendly, well rounded film.

Mission commander Commander Christopher “Kit” Draper, (Paul Mantee) and Colonel Dan McReady (Adam West) fly their bright yellow spaceship near the planet Mars. Their small craft includes the two of them and a mission monkey named Mona (relax: monkey-handling in this film seems relatively humane, even if the monkey wore a diaper while onscreen). A meteoroid threatens their path and they are forced to take evasive maneuvers, unfortunately bringing them into the orbit of the red planet itself. Each man abandons ship in a small craft and they land at some distance from one another, sans radio contact. After crashing, Draper hauls as much salvage as he can into a cave and takes stock of his oxygen, food, and water supplies. He has a recording and transmitting device of sorts, and he begins to narrate what he believes will be his last few hours.

The air on Mars is found to be breathable but very thin (this becomes a major plot concern); Draper can take sips off his air tank at intervals, but knows his number is soon up. When sufficiently prepared, he scouts off to meet up with McReady. But McReady has been killed at landing; the monkey Mona survives, and Draper takes custody of her. Once back at his camp, Draper’s air situation is dire; he stumbles (literally) into a (relatively improbable) solution by serendipity, and wakes to live another day. The air difficulty solved, he methodically turns to water – and then food – as his pressing issues. (No, he doesn’t eat the monkey – and who would want to?)

By this point in the film we know we will somehow encounter a “Friday” – and he soon materializes, played by Victor Lundin in a fright wig and brownface. With Friday comes the discovery that lurking above the surface is “the enemy” (as Friday calls them): a race of hostile spacecraft intent on mining and employing slaves. The two men are tasked with survival in hostile elements, with getting to know and respect one another, and with evading persecution by an aggressive alien colonial force. 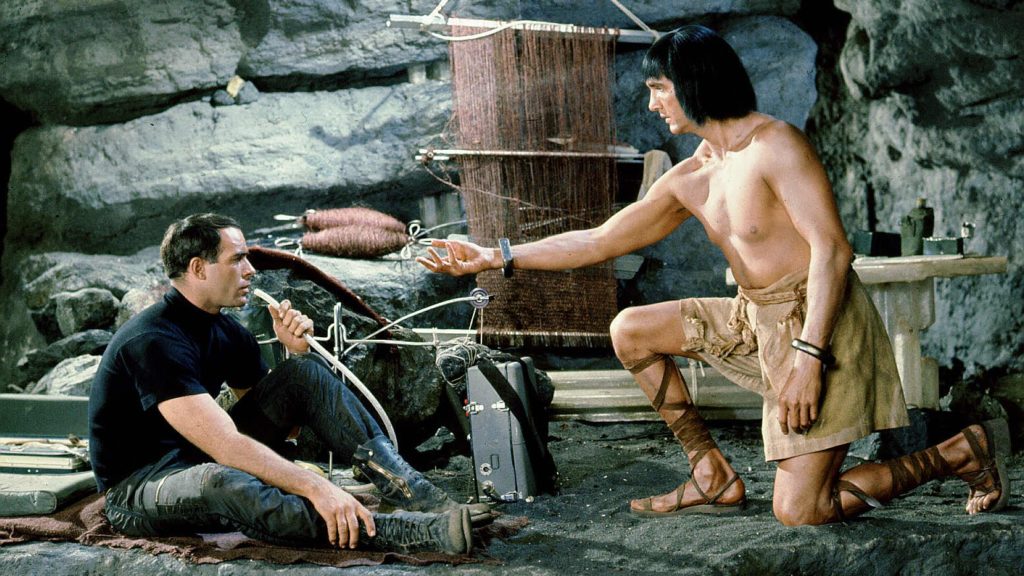 One of the last directorial efforts of the experienced Byron Haskin, Crusoe was a film Haskin enjoyed as he was afforded a great deal of creative control. Perhaps because of this, the film has a satisfying cohesive feel, especially in their development of Draper and later, the friendship between the two men. Mantee and Lundin create an agreeable chemistry in the second half of the movie, although racial attitudes of 1964 are apparent and unpleasant. Notably too, 1964 audiences wouldn’t have reacted much to West nor been much disturbed when his character is killed early in the film, as this was a couple years before West’s breakout “Batman” role.

The special effects of Crusoe are charming but unevenly manifested: for instance the miniatures, fullscale models and instrumentation are detailed and competently enacted. The paintings and sets (mostly colorful caves, for the latter) are pretty and, while not convincingly corporeal, deliver the delicious sixties sci-fi atmosphere many of us genre film fans have come to love. The stock-footage and atmospheric special effects are the least convincing of the effects, taking us out of the film a bit but being required for plot events.

Ultimately this was an enjoyable drama, if the third act denouement feels a bit rushed. A perfect film for sci-fi completists, or for family movie night – especially if you like monkeys and shirtless dad-bods.