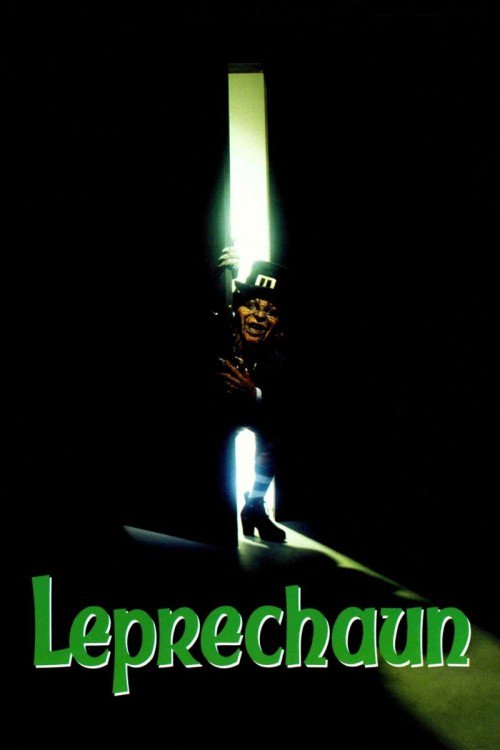 Ah, Leprechaun, early-nineties fairy tale horror and the first feature to hit the big screen in January of 1993. The film is a quarter century old and has inspired many knockoffs and parodies – and spawned six sequels. Despite the ridiculousness of its very existence I am here to tell you that the movie is –

KIND OF A GOOD FILM.

I know, I know. It’s almost unwatchable. Yes, I hear you. The production reads like a made-for-television kid spooktacular for the first forty minutes then weirdly descends into increasingly nasty gore and f-bombs. There is honestly little to recommend it when it comes to plot or acting talent (with one exception); and despite being Jennifer Aniston’s film debut (before her meteoric rise with “Friends”), it’s not even worth watching as an Aniston’s completist. But nevertheless the movie captured fringe pop culture status where it inexplicably endures. Made for $900,000, Leprechaun made nine million dollars and was a tremendous commercial success. People still search online for Wayne’s World‘s Leprechaun bit – and Wayne’s World came out right after Leprechaun, in a pre-meme era! A quick reference, indeed. Re-watcing I have to admit the film has a certain je ne sais quoi and no – I wasn’t drinking this St. Patrick’s Day. 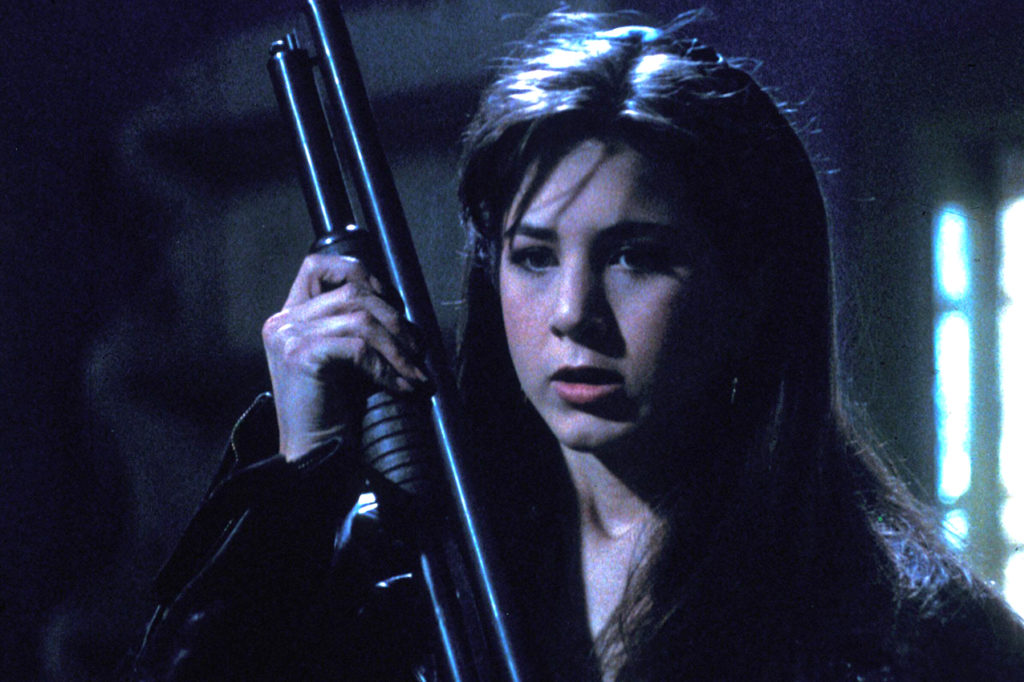 As the movie opens, Dan O’Grady (Shay Duffin) has stolen one hundred gold coins from a leprechaun (Warwick Davis) while visiting Ireland. The creature follows him stateside, murders Dan’s wife, and terrorizes Dan before the man can successfully capture and crate the monster. Ten years later, J.D. (John Sanderford) and his daughter Tory (Jennifer Aniston) open up O’Grady’s house to move in, employing the help of three housepainters Alex, Ozzie, and Nathan (Mark Holton, Robert Hy Gorman, and Ken Olandt). Nathan (a hideous amalgam of 80s Kevin Bacon and 90s Matt Dillon) flirts with Tory and she flirts back, meaning he belittles her at every turn and the script lets us know she’s a prissy big-city vegetarian. The group inexplicably begins painting the house sloppy, primary red and blue. Unwittingly, they disturb the leprechaun’s crate and he escapes. J.D. is soon is out of the picture, recovering from a very nasty bite at the local hospital, and Tory, Alex, Ozzie and Nathan head back to the house. As darkness falls they are terrorized by the evil little fellow, who is bent on retrieving his gold.

Look, it should be obvious by now there’s one thing and one thing ONLY to watch this film for: Warwick Davis’ performance. He is not just horrible and gleeful (as we’d expect!), he is so incredibly nasty and unpredictable. Is he scary? Not really – although a young child watching this film would certainly be terrorized. He is UNCANNY. He is fast, indestructible, and unrelenting. At times entirely focussed on his goal of reclaiming his pot o’ gold, he also takes a lot of time for self-care: stealing a half hour away to maul, terrorize and murder a deputy, then posing his corpse a few times. He attacks child Alex multiple times and tries quite earnestly to put the kid’s head in a bear trap. Early in the film he promises to bite off gentle Ozzie’s ear (and turn it into a shoe!) and at his next opportunity he does exactly that – for fun! Later still, he slashes Ozzie’s face multiple times with his long, disgusting nails – again, just to be doing it. You know. Perhaps the moment I knew the Leprechaun was absolutely my people was in fleeing the group, he delivers a swift kick to Nathan’s injured tibia: “How’s the leg?” he screams in passing.

The film isn’t great, but you come to a place of delight every time Davis is onscreen. I can’t help but think the actor must have had a wonderful time playing such a sonofabitch; he has had steady work in Hollywood for decades, but the Leprechaun franchise arguably put him on the map as a name. Davis plays the eponymous character in five of the six Leprechaun sequels: Leprechaun 2, Leprechaun 3, Leprechaun 4: In Space, Leprechaun: In The Hood, and Leprechaun: Back 2 tha Hood; the most recent installment, a reboot called Leprechaun: Origins, employs wrestler Dylan Mark Postl (also known as Hornswoggle). I’m almost curious enough to watch Origins. ALMOST.

For director Mark Jones, Leprechaun provided the opportunity to step from television into film, and the fellow has mostly stuck with horror since, including the suspiciously derivative Rumpelstiltskin from 1995. The films in the rest of the Leprechaun franchise are energetic enough but certainly get even more undignified: a review on Back 2 tha Hood flatly says: “”if a movie could spark a race riot, this is it.”. Leprechaun 4 features this delightful plot point: “the Leprechaun violently emerges from Kowalski’s penis after he is aroused during a sexual act.”

So yeah – I can’t personally recommend any of these later films. But then again – you are visiting a B-movie website, so I’m not sure exactly what you’re after. May you find it at the end of your rainbow! 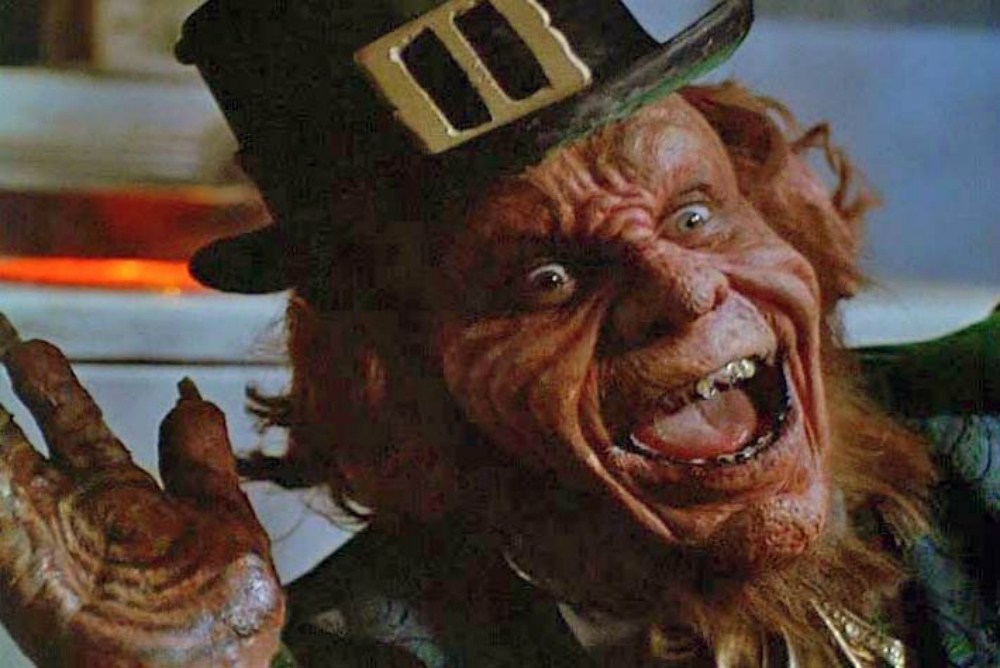