Spies, slashers, space battles, and spooks! This week’s roster was a well-balanced aperitif, if it led to a bit of gastroenteritis. – K. 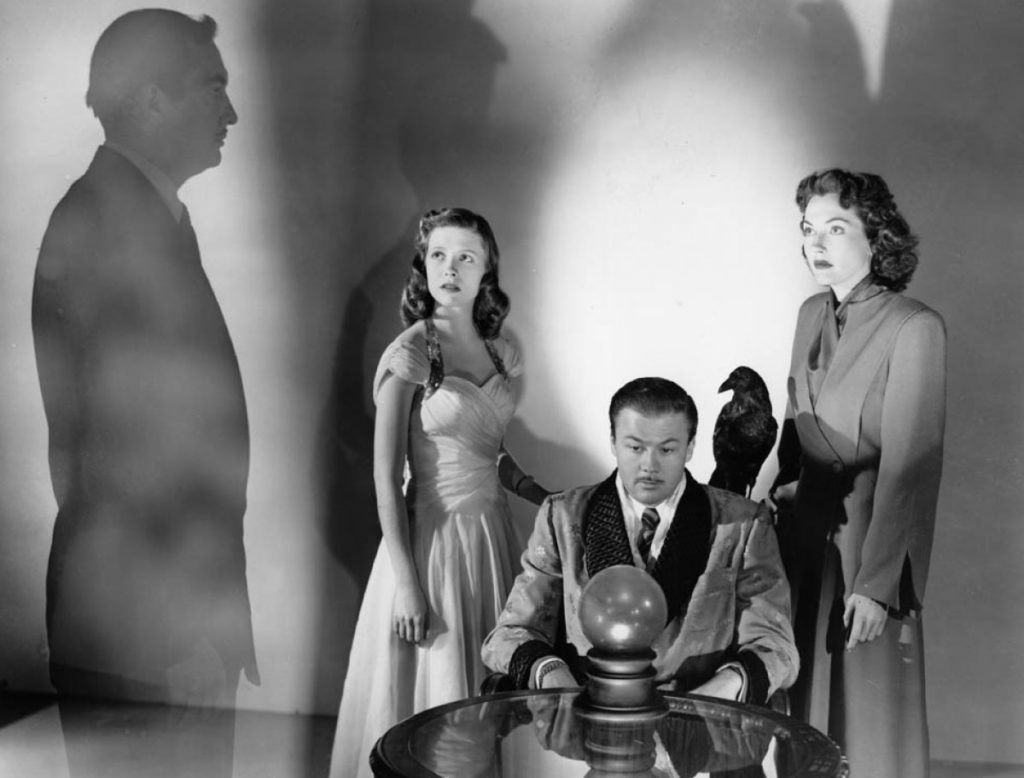 The Amazing Mr. X (1948)
Gaslight (1940) meets The Uninvited (1944), this film is weirdly good. That is if you like silly and vague heiresses gloomily gazing out french doors, occult mysteries, and smooth conmen – and I do! Wistful widow Christine (Lynn Bari) pines after her husband, dead two years, while she holes up in a glamorous beachfront home with her sweet and naive sister (Cathy O’Donnell). One night on the beach Christine runs into Alexis (Turhan Bey), a suave and handsome medium who convinces her he can help her make contact with her dear departed. But is he who he says he is? Of course not! Despite a little tedium – Christine is a bore after a while, as is her would-be boyfriend (Richard Carlson) – the film features a nicely-paced script, Bey’s pleasing and erudite handsomeness (fans nicknamed him “The Turkish Delight”), and just enough treachery and mystery to entertain. 3.5/5 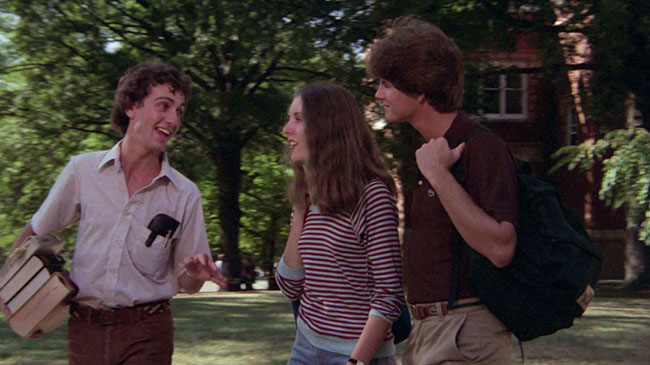 Final Exam (1981)
[ minor spoilers ]
An amorous couple is murdered by a knife-wielding maniac as they mess around in a car on college campus. Cut to the next week at another close by school, and the small group of students still remaining on site bicker about their finals, their sex lives, and (weirdly) the plight of a single solitary fellow pledging a frat. One by one the characters reveal themselves as the caricatures they are – the airhead, the uber-jock, the cruel heartbreaker – and one by one they are picked off. The film is mostly boilerplate slasher but has a few interesting differences: one, several scenes go on at length attempting to flesh out characters who typically aren’t given much in the way of personal development in these films. Even the first scene of this film is decidedly weird: the young man negs his ladyfriend, and the two discuss at length the difficulty in finding a private place for clandestine relations. This goes on for quite a bit before the stabbing starts, and these kinds of almost side conversations are par for the course in Final Exam; one scene involves an almost-thoughtful lecture on the harmful practice of hazing. Second: you can usually tell who is going to survive the runtime – in this case, the dull final girl Courtney (Cecile Bagdadi) and her would-be paramour Radish (Joel S. Rice), but neither Courtney nor Radish are precisely the perfomrances we’d expect in those roles – especially Radish (here’s a spoiler-festooned treatment of his character) – nor do they get quite the treatment we’d expect. Finally: the killer’s identity is just too ridiculous: he literally doesn’t have one. As in: don’t bother looking for clues, and don’t expect an explanation. Just some dumpy-lookin’ dude in a cargo coat showing up for murder-times. Some people think this last aspect makes the film brilliant; I think it’s just another non sequitur in an odd entry in the genre . 2/5 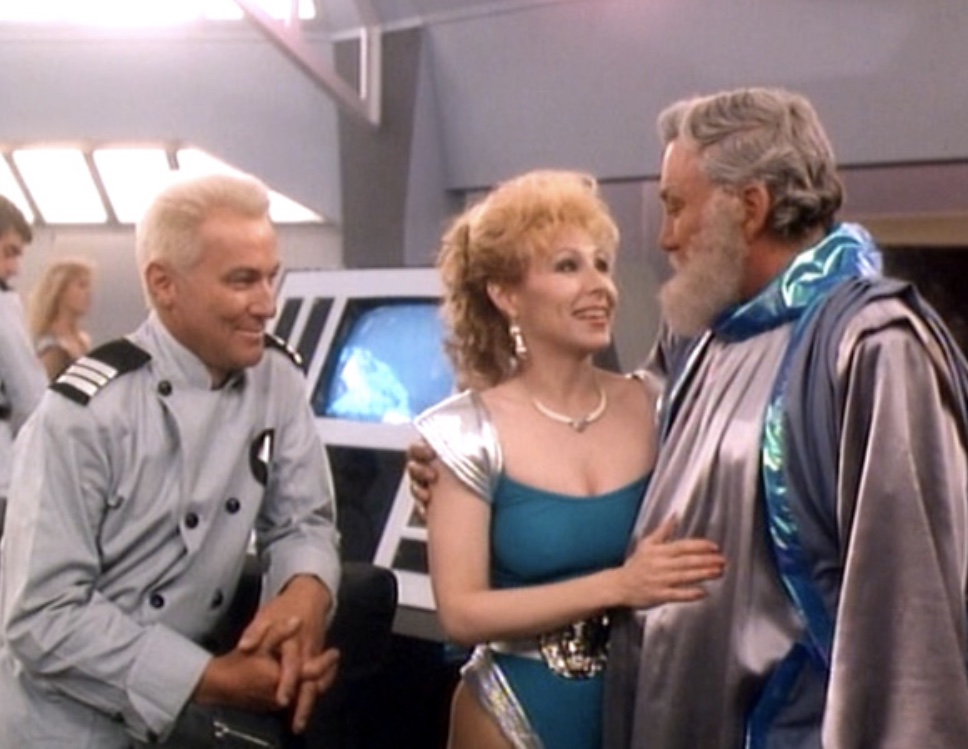 Space Mutiny (1988)
In terms of B-movies, this film separates the men from the boys: you’d have to be a crummy sci-fi completest to sit through this corny, plodding low-rent space drama from 1988. Centered around the Southern Sun, a colony ship helmed by Commander Jansen (Cameron Mitchell), unrest is fomented by Flight Commander Kalgan (Barbarella angel John Phillip Law) and Chief Engineer MacPhearson (martial arts action star James Ryan). Hot shot pilot Dave Ryder (née Captain America and B-movie weightlifter Reb Brown) shows up to save the day, bantering and falling in love with the Commander’s fiesty daughter, Dr. Lea Jansen (Cisse Cameron). A subplot involves sexy psychic space witches who dance around in filmy scarves and whisper-seduce some of the crew. Much of the film involves ludicrous golf cart chases, dull dog fights, and an astonishing number of even duller railing kills. Adorably, Brown and Cameron have been married almost forty years as I write this. The film’s status as a beloved “MST3K” episode, the hamminess of Mitchell, Law, and Ryan, and the cuteness of the couple (Cameron might be the most competent actor on set but Brown is fun to watch) make this film a surprisingly fun watch – if you’re into that sort of thing. Like I am. 3/5 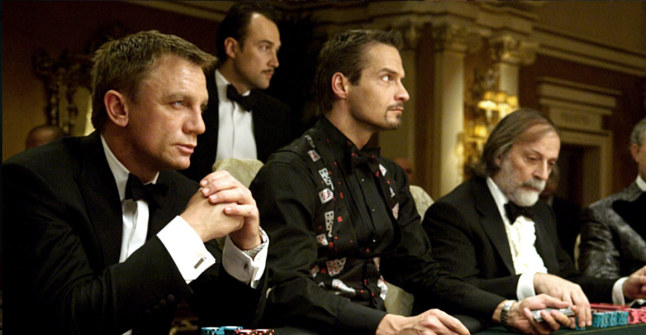 Casino Royale (2006)
Incredibly, there were only four years’ gap between Die Another Day, Pierce Brosnan’s fourth and last Bond, and Casino Royale, the first in the Daniel Craig iteration of our favorite MI6 agent. I saw Casino in the theater and I was, to use the phrase, gasping for it! Now, looking back as we anticipate Bond 25 in 2019, the Craig era is firmly established on strong footing and has revitalized the franchise. Bond films have always featured gorgeous on-location settings, beautiful (and disposable) women, superb scores, fun (if implausible) weaponry and gadgets, impressive stunts, and fantastic fashion. These values are still firmly in place. Mads Mikkelsen plays our creepy villian and Eva Green Bond’s latest (or first, depending on your point of view) love. Judi Dench reprises her Brosnan-era role of M perfectly, the only cast member carried through from the previous installments. Locations include Venice and Lake Como in Italy, Montenegro (filmed in the Czech Republic), and the Bahamas. Interestingly the director chose to withhold the Bond theme music until the very end of the film, as the coldly rageful Bond menaces the mysterious Mr. White (Jesper Christensen), to thrilling effect. An absolutely stunning reboot for 007, if a little overwrought at times. 4/5