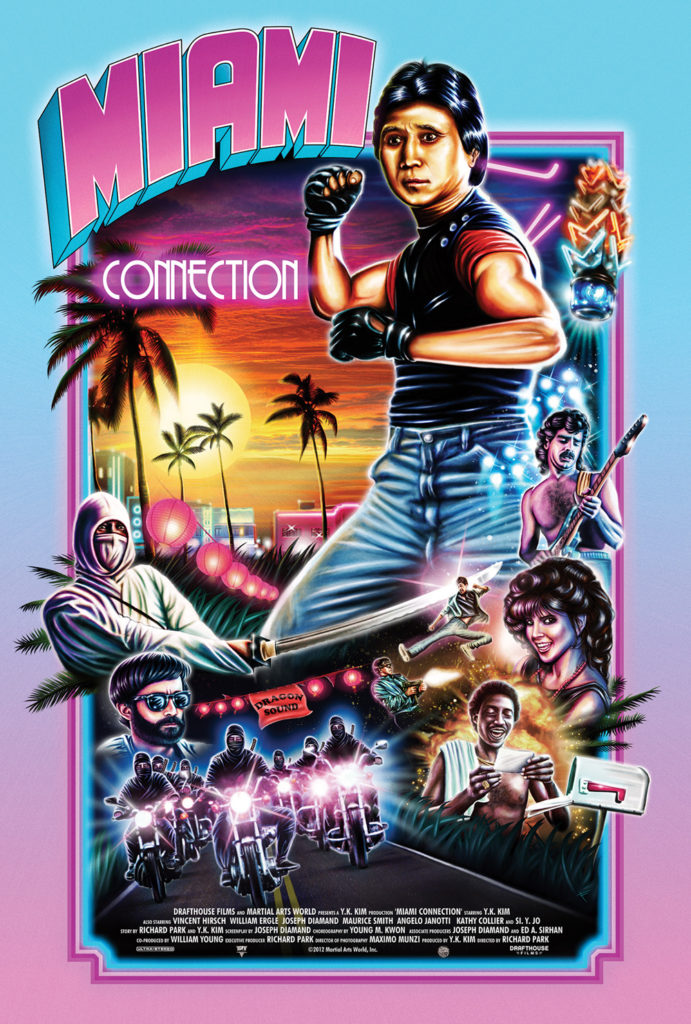 Synopsis: five orphans room together while attending Central Florida College; nights they moonlight as the rock band Dragon Sound, and wage battle with drug-dealing motorcycle ninjas operating out of Orlando.

Miami Connection is one of the most earnest, energetic 80s martial arts action films I’ve seen. I got on board with the movie in 2013, shortly after it was re-released by Drafthouse Films. This epic action delicacy had flown under the radar for years, enough so that star, writer, and producer Y.K. Kim thought the millenial burgeoning interest in the critically-failed film was a joke. But the new distribution soon put the film on the cult circuit’s radar, and deservedly so.

Our five heroes (and roommates and bandmates) are a chummy bunch: guitarist Mark (Kim), bassist John (Vincent Hirsch), drummer Jack (Joseph Diamond), keyboardist Jim (Maurice Smith), and lead guitarist Tom (Angelo Janotti); as the film starts it is quickly established – through song – that this quintet wages a clandestine war against drug-dealing ninja leader Yashito (Siyung Jo) and his motorcycle gang. Complicating matters, the band’s vocalist Jane (Kathie Collier, the only woman in the film) is dating bassist John; in a Romeo and Juliet twist Jane is sister to Jeff (William Ergle), a close associate of Yashito’s. Most of the film consists of fight scenes (with TONS and I mean TONS of guys), rock songs at the club, and touching vignettes into the five roommates’ life, including a plotline involving Jim’s father that provides a great deal of unintentional comedy.

Now, I have seen this film several times and I love it. It isn’t a “good film” per se. The martial arts skills of the actors vary from adroit (Y.K. Kim, who is a den mother of sorts to the other guys) to … well… laughable. In short there are an awful lot of clumsy action scenes and guys kind of flopping around. The pacing and intensity are also a liability: scenes careen from apartment, to Dragon Sound concert, to industrial park, to beach, to homey Korean restaurant, to biker bar, et cetera, with the same energy in each shot. This has the effect of never quite letting you know when a fight scene is a big epic fight-to-the-death moment, or just a bit of padding.

The film is also, despite a few gore scenes like heads and limbs being lopped off – curiously wholesome. Dragon Sound’s songs are… I hate to admit it … kind of catchy. And the five guys are just goofy in a way that can’t quite be considered offensive or off-putting. You get the impression our leads had a great time making this film. Even Yoshito is kinda cool. He hangs out with some bikers – obviously real bikers, not actors, complete with wild biker breasts and cigarettey make-out sessions – and honestly seems like a fun-loving fellow. Except for his ruthless narcotics-dealings. Anyway, the whole business winds up to an epic showdown and a lethal (or… maybe not?) sword injury to a beloved character, and ends on a requisite, “we must learn how to eschew violence” endquote, a staple of so many violence-saturated movies.

I’ve watched it many times and I’ll probably watch it again. If intelligent extraterrestrial life were to observe our 80s martial arts action films and be tasked at generating one themselves: Miami Connection would be the result. If you like anything about 80s action, you owe it to yourself to watch this film. 4/5