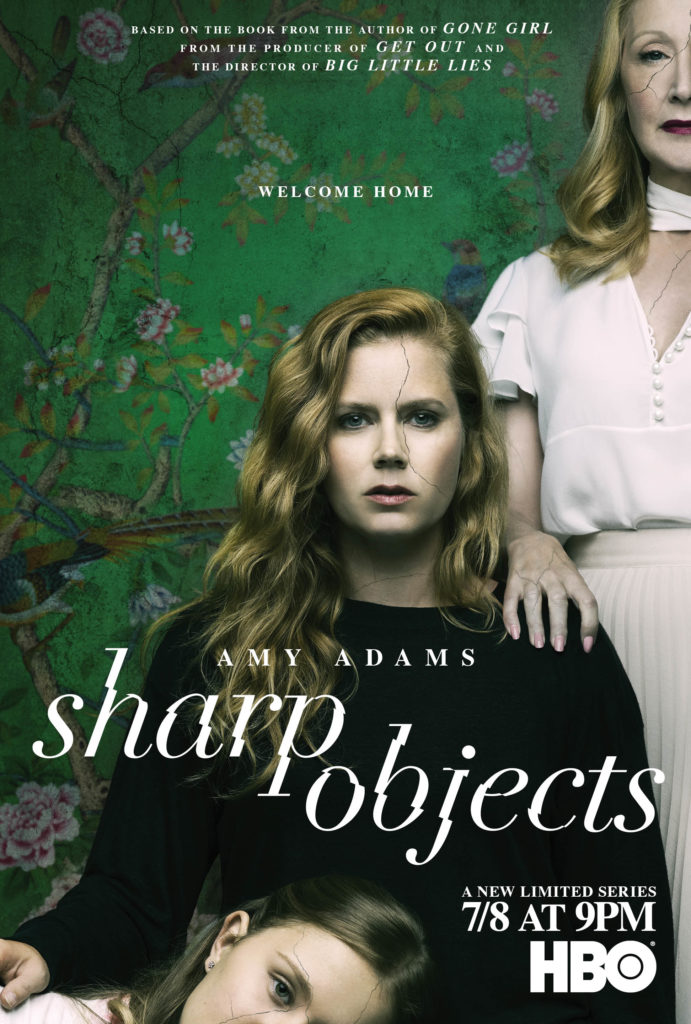 I’m going to come right out and say that I loved “Sharp Objects”, based off Gillian Flynn’s 2006 debut novel, despite considerable flaws. I’ve described the series in shorthand as “True Detective” Season 1 – for ladies. Both programs center around the boilerplate fascination with murdered white girls (I mean… I guess we haven’t exhausted this topic yet?), and both are steeped in a folksy (and not entirely convincing) American Bible-belt dystopia. But most notably, both series devote serious runtime in detailing and caressing the deeply self-absorbed, crummy behavior and worldview of the series antihero. In “Sharp Objects”, instead of having to listen to the fingernails-on-chalkboard manguishy monologues of Matthew McConaughy’s Rust Cohle, we are instead treated to the vodka-drenched, hundred-year stare and whispered dramatic line reads of thirtysomething St. Louis reporter Camille Preaker (Amy Adams). Camille is a crummy St. Louis reporter returning to her home town of Wind Gap (population 2,000) to investigate a serial murder case involving pretty girls. Camille is troubled (with a history of self-harm and a very active alcohol dependency) and describes herself as “white trash” to her St. Louis boss; she’s haunted by visions of at least two ghostly young women, and she listens to Led Zepplen while drink driving her beat up Volvo around town and having one cynical corn pone conversation after another. By the way I hope you wanted to watch her driving around drunk, listening to music. Those scenes take up about thirty percent of the program’s runtime.

It turns out Camille isn’t just from a wealthy family, she’s from the wealthy family in the region, that of the hog butcher magnates the Crellins. The family is now holed up in their stately but creepy home: mother Adora (Patricia Clarkson), marvelously cuckolded and irrelevant Alan (Henry Czerny), and coddled Mean Girl teen Amma (Eliza Scanlen). The family spends spend their time drinking (everyone drinks in this program, just get used to it), and floating around their parlour being impossibly whimsical and tragic. Adora in particular centers herself and her own anguish as much as possible, speaking aloud not only her disappointment in Camile as a daughter, but in her dismay that her oldest daughter is investigating the murders at all. These “dead girls”, see, remind her of her own long-gone daughter Marian (Lulu Wilson), whose mysterious demise haunts everyone in the family but seems to trouble Camille the most. 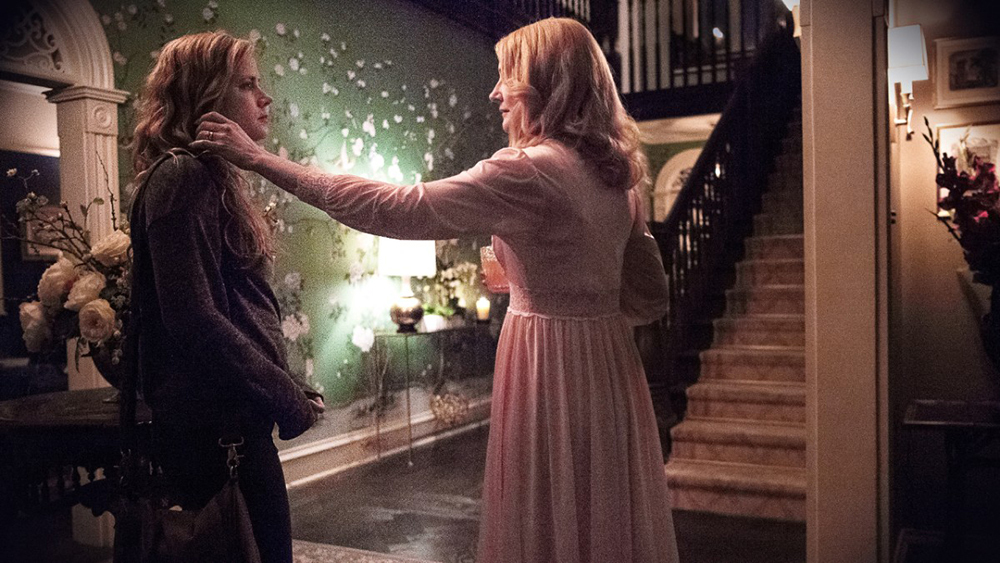 Camile is a mess. She is in recovery from – or at least on hiatus from – a self-harm habit. She drinks all day long or risks delirium tremens. Flashbacks hint at traumas in addition to the messy death of her sister: sexual assault, and a violent death witnessed first hand. The first half of the series is preoccupied with tons of ghostly or murdered young women (showing up in dreams and daytime hallucinations) and at first it’s hard to keep them apart. “Dead little girls everywhere,” local character Jackie (Elizabeth Perkins) tearfully mourns into the bar mirror, shaking her head. To which I’m thinking: hey, YOU all wrote the show, YOU decided to make yet another misery-series on this topic!

Because “Sharp Objects” provides us with not one, not two, but four dead, blonde white teenage girls (killed in a variety of ways and not through the same agent) and promises us a fifth. Despite these high-profile murders (and the hint at a female serial killer; incredibly rare), these killings apparently only invoke precisely ONE detective (a brooding Chris Messina) and ONE sheriff (Matt Craven) to investigate. Remind me not to get murdered in Missouri! And while Wind Gap supposedly has 2,000 people or so, it also boasts high-end dress boutique, hip bars plenty busy in the daytime, and rager houseparties packed with hundreds of teens (Um. Okay.). 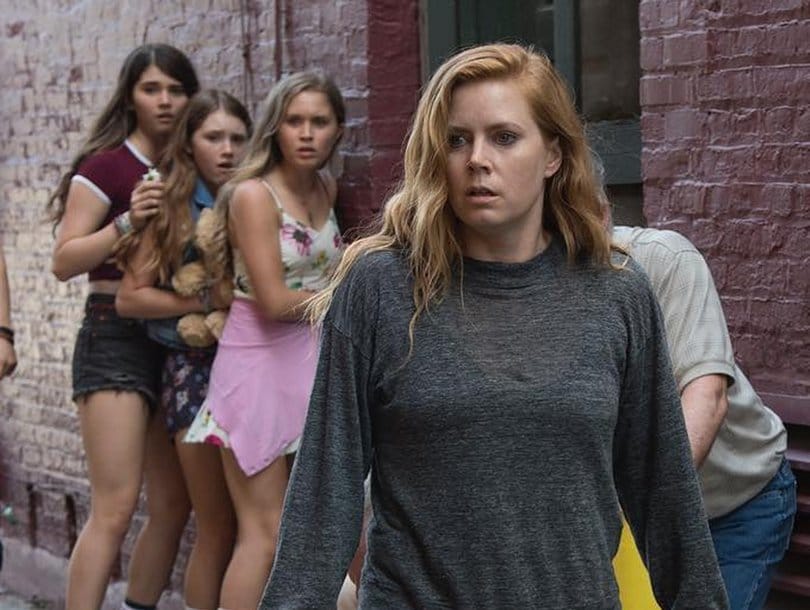 There is a lot to like, besides Adams’ flawless performance. “Sharp Objects” is an extraordinary slow-burn and provides a great deal of tension; that’s one reason I enjoyed it so much. I was constantly wondering when the violence would erupt, and who was going to try to bed who (on the latter subject the series might also be called “Bad Choices”). The show’s depiction of both alcoholism and a self-harm history does not seem terribly inaccurate, and often reeks of misery tourism and convenience. In the third act, Camille – who has been given a temporary break in the case – seems to have recovered with no effort on her part. (As is often the case in these types of programs, we can tell she’s recovered because her hair is washed and her makeup is better.) It’s a cheap device and one we see too often in these noir efforts. That said, you know what? It’s fun. It’s like a big sticky sugary popcorn ball of nasty deliciousness. I ate it all up!

In the final analysis “Sharp Objects” is a cut above the many, many, many other stories of this ilk, and I am down for dozens if not hundreds more such women-oriented and produced dramas to ameliorate the the male-saturated production, writing, and directing teems we’ve heretofore experienced. The soundtrack and stellar performances – especially of Adams and Clarkson – make the damn thing well worth watching, especially if you crave a nice, Feel-Bad series. As I often do.